Law enforcement officers only need articulable suspicion that a crime has taken place. The word “articulable” is a synonym of the word “reasonable.” This is how Wikipedia explains the criminal law legal standard for traffic stops near me:

Reasonable suspicion is evaluated using the “reasonable person” or “reasonable officer” standard, in which said person in the same circumstances could reasonably suspect a person has been, is, or is about to be engaged in criminal activity.

The internet dictionary goes on to point out that each case depends upon “the totality of circumstances.” The needed proof of a warrantless search can be derived from a combination of particular facts given by law enforcement officers, supplemented by video evidence, even if each act or action (standing alone) is seemingly an innocent activity.

The information used by the officer can come through information from a radio dispatch or through observing some moving violation, defective equipment problem, or possibly an omission to seatbelt a child passenger. The traffic pullover starts as soon as the “signal” to stop is given. Your Maine criminal defense attorney near me will isolate on what was known or had been observed at the exact moment of “seizure,” and not found later, when the vehicle and driver are stopped.

If you were stopped by police in Lewiston, Auburn, York Beach, Biddeford, Brunswick, Westbrook, Bath, Portland, Saco, or Sanford Maine, our lawyers regularly appear in these criminal courts for our clients.

How the 4th Amendment Limits Pullovers and Vehicle Searches and Seizures

What is an illegal stop? If the police used their emergency lights or siren to illegally stop you, then your case may be thrown out of court by use of a pretrial motion to suppress. With what is called the “exclusionary rule,” your judge has the power to toss ALL evidence gathered after the fourth amendment viatiooln happened, which is usually turning on emergency lighting, to signal a traffic stop.

Wording of the 4th Amendment of the United States Constitution: The right of the people to be secure in their persons, houses, papers, and effects, against unreasonable searches and seizures, shall not be violated, and no Warrants shall issue, but upon probable cause, supported by Oath or affirmation, and particularly describing the place to be searched, and the persons or things to be seized.

The warrant requirement of this Amendment is seldom an issue in traffic pullovers. But the first sentence of Amendment IV has been applied to tens of thousands of pre-trial motions, just like the once raised by our criminal lawyers near me in the south part of the Pine Tree State.

By way of example, this means that (under the new handsfree law in Maine), you could be legally stopped by a police officer if he or she thinks that you were holding your phone and can articulate to the assigned criminal court judge the reason that officer thought the offense happened. That description and the details given could turn out to be wrong, but the pullover could be authorized in that judge believed that he or she activated blue lights following a “good faith” belief that a crime was being committed.

A motorist can be stopped for anything from improperly tinted windows (too dark) to driving one mile per hour over the posted speed limit. Minor defects (e.g., tag light out) or expired tag information is enough to justify a police officer’s stop. In addition, not yielding to a fire truck or EMT vehicle responding to an emergency is enough to justify a cop stopping you.

What If the Police Were Wrong About the Basis of the Traffic Stop?

Once all “discovery” materials are turned over by the Prosecutor, your criminal defense attorney combs through any video evidence, audio taped calls by or from dispatch with your officer, and any 911 calls in which another driver called in any report of dangerous driving. If none of that exists, then the focus of the investigation by your criminal defense lawyers is to negate the “reasonableness” of the officer’s actions. 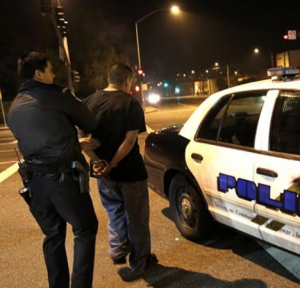 Another illegal stop would be just pulling you over for acting “suspicious but committing no traffic offense. In some jurisdictions (Mississippi, New Jersey), being pulled over because of your race has caused cases to be tossed by a judge.

Some officers claim to have pulled you over because you are driving slowly through a “high crime” area in the middle of the night, and possibly have an out of state vehicle tag. This is not a crime or traffic violation and there can be no articulable suspicion for a legal stop.

What Happens If My Traffic Pullover Was Illegal?

Even though so many reasons exist for an officer to stop you, if the stop was in fact improper or illegal, a good chance exists that any evidence obtained from the traffic stop should be thrown out. If that happens, the evidence of drunk driving or drug possession cannot be used against you in a trial.

If you have questions for the best law firms near me in southern Maine, about the legality of your traffic stop, and how that could change your case, you should call today for a FREE lawyer consultation. 207-283-6400. Ask about our fee payment plans and get a free evaluation of the merits of your case.

The Webb Law Firm offers a free lawyer consultation on EVERY criminal case. This allows you to confidentially talk to criminal lawyers near me about your case and the legal services that would benefit you the most. Call today 207-283-6400 to set up a time to speak with an attorney about your free of charge initial consultation.

Saco, ME OUI lawyer John Scott Webb is a Super Lawyer with over 20 years of experience helping people during a very difficult time in their lives. His attorney ratings can be found across the internet on lawyer ratings sites like AVVO.com, Justia.com, and Martindale.com.