Only about 2% of all criminal defense attorneys in America are fully trained in the National Highway Traffic Safety Administration SFSTs (standardized field sobriety tests). When any driver is suspected of DUI-OUI alcohol, traffic cops across America are trained to administer the SFST 3-test battery to the suspected drunk driver.

Spoiler Alert. The first and last thing you need to know about the field sobriety test instructions is to simply say, "No, thank you." Because all of these are optional, voluntary and there is NO PENALTY for declining the non-scientific evaluations, NO ONE should attempt them, and you’ll see why below.

However, once arrested for an OUI, if you refuse to submit to the Intoxilyzer 8000 test, you will suffer harsh license suspension consequences in the Pine Tree State. If your driving impairment is reasonably believed to be from anything but alcohol, a blood test will be requested. The driving while high consequences of suffering loss of driving privileges will follow any refusal.

OUI or "operating under the influence" is the name of the Maine crime for impaired driving in the State of Maine. Rhode Island and Massachusetts also use O.U.I. as their acronym for driving intoxicated. In OUI Maine crime cases, only criminal attorneys near me from the best criminal law firms have this special training. The many myths about field sobriety tests and DUI arrests.

What is a Standardized Field Sobriety Test (SFST)?

Before 1984, no agreed-upon field sobriety test definition existed for police officers, and NHTSA adopted unproven science and methodology in putting these so-called "tests" into use. In the early 1970s, after NHTSA was launched, an enterprising student at the University of Southern California “suggested” that police needed uniform roadside testing, before arresting people.

The latest NHTSA SFST manual was released in September of 2018, and (like other recent editions) dramatically changed some important language about "standardization." The original idea (promoted through her Ph.D. thesis, by the late Dr. Marcelline Burns, Ph.D. in 1970), was to create a battery of reliable roadside "exercises" that the average person could do and thereby allow this testing to determine whether to arrest the person for driving impaired.

Police take a "practitioner's" course that consists of at least 20 hours of instruction and demonstration. One of the training segments explains how to test for nystagmus, which is medical test that registered nurses are not trained to give and evaluate, but an officer with a GED or high school education can do it to arrest people.

A Texas review of thousands of police videos of arrests for driving while intoxicated was made by seasoned police trainers Troy Walden & Lance Platt for their Ph.D. theses. In these roughly 5000 DWI arrests, detailed review showed that over 98% of all officers did not give correct standardized field sobriety test instructions or did not perform or instruct all three evaluations properly yet still arrested ALL these many thousands of drivers.

A "Battery" of Three Roadside Tests

Every manual calls for taking NHTSA SFST field notes, but many officers take few if any notes at the roadside. These are supposed to be used to create a SFST score sheet, to be added to the arrest report.

Since the government's initial publication of a very short NHTSA DUI manual in 1984, over a dozen much longer modifications to the written materials on the NHTSA field sobriety tests have been inserted.

In addition, how to evoke the NHTSA DUI clues (e.g., lack of smooth pursuit speed of passes) have been inserted in the NHTSA manual, that is handed out to each practitioner. So, updated SFST training has been required every few years, just to see what is different.

The SFST Test done first is the Horizontal Gaze Nystagmus (HGN). If done in accordance with training, the DUI eye test (called the HGN test or nystagmus test) is the first to be utilized. If an officer thinks that she or he detected 4 or more standardized field sobriety test clues in the NHTSA HGN test, that is an arrest decision, and nothing more is required. 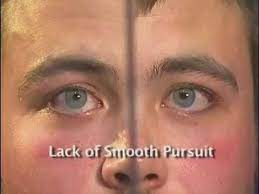 In terms of "scored" clues, there are 6 horizontal gaze nystagmus clues. An unscored part of the evaluation is to look for resting nystagmus by not moving the stimulus. They are called equal tracking, lack of smooth pursuit, and onset of nystagmus prior to 45 degrees from center point, moving out to the left or right.

This is the only "psycho-physical" test used by police. The other two highway tests are divided attention evaluations for which “ability to pass” is largely determined by the person's youth and physical conditioning.

HGN clues. The many steps required (to do in a standardized” manner) cannot be varied or omitted, and still be incompliance with NHTSA training. Officers do NOT remember the many steps, and so many law enforcement officers carry the SFST instructions NHTSA SFST pocket card, so they can read up on the steps on how to check for nystagmus and not botch the evaluation.

The Two Divided Attention Evaluations The Walk and Turn Test

The next evaluation is a divided attention evaluation. It is often abbreviated "WAT".

The scoring on this evaluation mandates that the officer "write you up" as having not passed it, if 2 or more standardized field sobriety test's walk and turn clues or "cues" are detected. 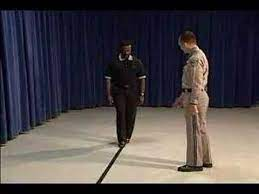 Some of the instructions tell the DUI-DWI suspect to:

The One Leg Stand Test (OLS)

Once again, the subject is told to stand with his or her arms down by their sides. They are told how to lift either foot, 6 inches off the ground, and look at the toe of the raised foot, while counting out loud for 30 seconds in this manner, one-thousand one, one-thousand-two" and so forth.

During the attempt to complete the OLS, the subject is not supposed to put the raised foot down, nor sway, nor hop, nor raise her or his arms for balance. If 2 or more errors are observed on the OLS test, this is a "failing grade."

If the arrest was in Augusta, Portland and south of there, call today to our Law Firm for a FREE lawyer consultation. Let the criminal lawyers at Webb Law Firm use our familiarity with your southern Maine courts to find a great solution for your drunken driving case. (207) 283-6400. 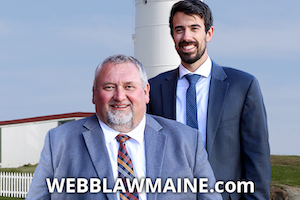 If a Maine accident or traffic stop has you on the roadside and being asked to perform field tests, say "no." Our lawyers for DUI near me in the south of Maine are training in fighting the SFSTs and ready to defend your criminal law case.

Later, you can locate the best criminal lawyer for your case but be aware that the post-arrest test demanded under implied consent law must be taken, or you will be suspended, after being arrested. Plus, a blood draw warrant may still be obtained by the officer.