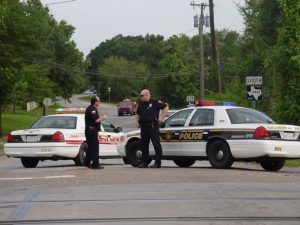 So a thousand drivers are stopped.  Every one one of those drivers who has even one drink is hauled out of the car and made to perform roadside gymnastics to prove they are OK to drive.  Responsible drinkers are made to walk the line and balance on one foot in front of their neighbors.  That’s a pretty big intrusion into your liberty and mine.

The Fourth Amendment to the Constitution says police must have actual suspicion that you committed a crime before they can stop you.  Where is the suspicion in driving down a road – not swerving, not speeding – just driving?

So why do police set up these DUI roadblocks when they know they are less effective than regular police patrols.  One word:  MONEY!

DUI checkpoints are big business for police.  Last year the federal government gave out millions of dollars to police departments for roadblocks.  They did it this year, too.  And they are going to do it next year.

Those millions of dollars come from you and me when we pay our taxes.

Most of those millions of dollars go to overtime for the police on the roadblocks.  In California alone the federal government paid $30 million dollars for DUI checkpoint overtime in 2009,  That’s just one state.  Nationwide it is hundreds of millions of dollars.

So why do we allow the federal government to spend our tax dollars on ineffective law enforcement?  If those same dollars were spent on regular police patrols they would catch ten times as many drunk drivers.

I don’t have the answer.  Maybe your congressman knows.  Why don’t you write to him or her and ask?