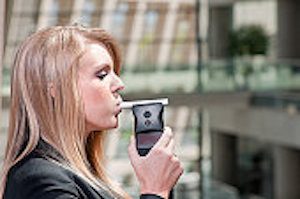 Very simply put, breath testing machines like the Intoxilyzer 8000 test for breath alcohol levels by measuring the amount of infrared light that is absorbed by a breath sample.  The theory is the more light that is absorbed, the higher the level of alcohol in the sample.  The machines generally consist of an infrared light source – in the case of an Intoxilyzer 8000 that is a heated wire.  The light shines through a breath sample and a detector measures the amount of light at a particular wavelength that passes though the sample.  A counter then measures the amount of light detected.  The difference between the amount sent into the chamber and the amount out allows the alcohol calculation.  Each stage of this process involves an electrical circuit with components that can be affected by RFI.

The manufacturers of breath testing machines recognize that RFI can affect the result – that RFI can cause false high readings.  They all take some steps to protect against RFI.  The Intoxilyzer 8000 uses what they call a RFI detector.  When RFI is detected, the machine is supposed to stop the test and print an error message flagging RFI.  Many experts believe the machines do a poor job of detecting RFI.

Experts say that the antennas for the RFI detectors used in today’s breath testing machines are virtually unchanged from those of thirty years ago. Those antennas were designed to detect police radio transmissions.  Thirty years ago – before everyone was carrying cellphones and when there were far fewer computers and personal electronic devices- this may not have been a bad system.

But this is today.  Everyone has a cellphone.  This includes the police officer giving the test.  Cellphones do not operate on frequencies anywhere close to police radio frequencies.  The detectors have trouble seeing them.  But they still affect circuits.

Anyone who doubts that cellphones can affect important circuits should read “Turning Off IPhone Critical to Pilots Citing Interference” by Alvin Levin published in the Bloomberg News.   Mr. Levin’s article documents incidents where airliner navigation devices were affected by cellphone RFI. The problem is real.

Cellphones transmit signals, even when you are not actively talking on the phone or texting.  When the cellphone is on it is constantly pinging cell towers to find the best signal.  This happens about once every seven seconds or less.  That signal can affect your breath test.  When you talk on the phone the signal is constant.

In the hundreds of breath test videos I watch, very, very few officers turn off their cell phones.  I  see people talking on cellphones during breath tests.  But the detectors never say they found RFI.  The test just goes on.  I don’t think it is laziness.  I think it is bad information from the manufacturers and bad police training.  It is over reliance on outdated RFI detection technology.

And cellphones aren’t the only sources of RFI.  Computers are often located right next to the breath testing machines.  Today’s police departments are full of electronic devices that transmit signals.  And those signals are not necessarily on the police radio frequencies where the RFI detectors can find them.

Breath tests are very important evidence in the eyes of a judge or jury.  They need to be very, very accurate.  If cellphones and other devices are in the breath test room, that accuracy is potentially compromised.