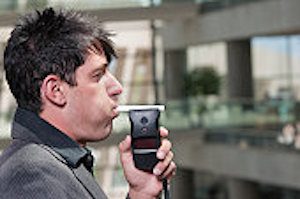 In 2013 the Supreme Court held in Missouri v. McNeely, 133 S.Ct. 1552 (2013), that a blood draw is a search requiring a warrant or a warrant exception. Since then I’ve been arguing that the same logic applies to a breath test. I based this argument on Skinner v. Ry. Labor Executives’ Ass’n, 489 U.S. 602 (1989) that held a breath test is a search. Skinner did not address the warrant issue because of special circumstances associated with regulation of the railway industry. Up until now I’ve had little success. Judges are reluctant to change decades of practice, even if that practice was unconstitutional. Last week I finally won a round in this fight.

In last week’s case my client was given field tests and then asked to voluntarily come down and take a breath test. He asked the natural question, “What if I don’t want to?” The officer told him that he would be arrested and taken to jail if he didn’t agree to take the test. If he agreed to take the test the officer promised to bring him home and not to jail, regardless of the test result. I moved to suppress the breath test for a lack of a warrant or warrant exception.

In a motion alleging a warrantless search, the state has the burden of proving there was a valid warrant exception. Recognized warrant exceptions are search incident to arrest, consent, exigent circumstances and a few others. The Supreme Court, in Arizona v. Gant, 129 S.Ct. 1710 (2009), limited the search incident to arrest exception to the extent that it cannot apply to breath or blood tests. Exigent circumstances are situations where it is extremely impractical for the officer to obtain a warrant in time to conduct a meaningful search, or some sort of emergency. In my case the state did not argue exigent circumstances. It is unlikely that any such argument would have been successful. Instead they focused on consent.

Every state has an Implied Consent law. That law says you will consent to a test or bad things will happen. Usually the bad things are license suspensions and telling a judge or jury that you refused a test when you take the case to trial. In some states it is a crime to refuse a test. The state argued that this was automatic consent that could not be revoked. The judge in my case did not agree. She found that consent to search for Fourth Amendment purposes must be actual and voluntary.

The state’s actual consent argument was in two parts. First, the cop denied that he told my client he would go to jail if he refused to volunteer to take the test. Fortunately, we had a very credible witness who heard the whole thing. That witness was clear about what she heard, and equally important, she was clear about what she did and did not remember. The officer was not so credible. His story has some inconsistencies, and things he did admit saying suggested there was talk about going to jail that he was denying. The judge believed the civilian witness and not the officer.

This left only whether my client actually consented to take the test. The judge held that a threat of jail was coercion that made the consent involuntary. She suppressed the breath test.

While this is a good start, we are not out of the woods in all cases. Many judges are holding that when an officer reads a person the Implied Consent consequences of refusing, that this is not coercion. Their logic is that the officer is simply advising the person of the legal consequences of refusing, and not engaging in threats. The problem with this logic is that if relies on the fantasy that the police and the lawmakers are unrelated. If the legislature passes a law that makes threats for asserting one’s constitutional rights, it is a threat by the government. Period. It doesn’t matter if the threat is communicated by a police officer or a state representative, it is still government punishment for asserting a constitutional right. It is coercion by the government.